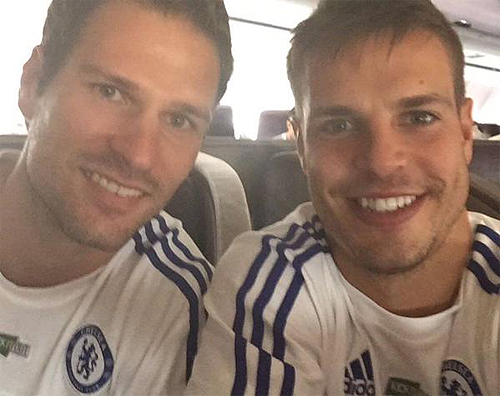 Cesar Azpilicueta joined his new Chelsea team-mate Asmir Begovic for a selfie as the Blues jetted off to Toronto on Wednesday.

The Bosnia-Herzegovina goalkeeper penned a four-year deal with the west London side on Tuesday after he completed a move to the Premier League champions from Stoke City.

Begovic, who takes over the number one shirt following Petr Cech’s departure, will be competing with Belgium international Thibaut Courtois for a first-team place.

And Chelsea defender Azpilicueta was busy making the new Blues signing feel welcomed at the English champions after he posted a selfie with the shot stopper on his Twitter.

On our way to Canada with our new team mate @asmir1! ✈️ @ChelseaFC pic.twitter.com/lP8j6S77Nv

Begovic, who stands at 6ft 6ins, spent five-and-a-half years with Stoke after he moved to The Britannia from Portsmouth in 2010.

The Bosnian made 176 appearances for the Potters and Begovic played for his country at the World Cup in Brazil last summer.

Mesut Ozil: Why Arsenal can win the Premier League next season