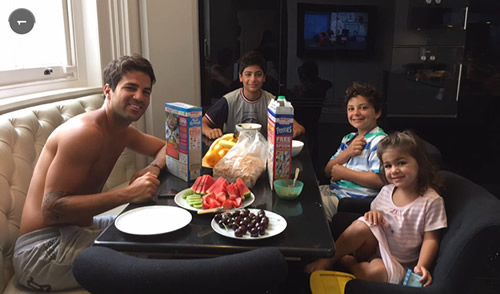 Cesc Fabregas was all smiles as he tucked into breakfast with his family on Monday morning as the midfielder continues his preparations for the new Premier League season.

The Spain international is back in London after enjoying a summer break with his family and looked to be in a cheery mood despite the gloomy weather in the capital on Monday morning.

Fabregas Snapchatted the picture above on his official account on Monday, presumably ahead of returning to pre-season training with Chelsea.

The former Arsenal captain, who joined Chelsea from Barcelona last summer, celebrated the birth of his second child on Friday with his partner Daniella Semaan.

The couple, who already have a two-year-old daughter, Lia, looked in good spirits as Fabregas shared the picture below of him and his girlfriend along with their newborn baby.

Chelsea kick off their Premier League title defence with a home clash against Swansea City on the opening day of the season.