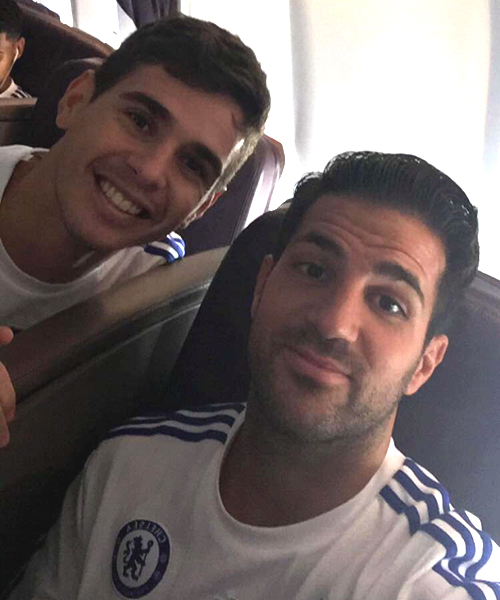 Cesc Fabregas snapped a selfie with Oscar ahead of the Chelsea squad’s flight to Canada on Wednesday.

Jose Mourinho’s title-winning side have reunited for the start of the pre-season tour after a couple of well-earned months off.

The Blues eased to the Premier League title last season but their title rivals Arsenal, Manchester City and Manchester United have all strengthened in recent weeks.

But Fabregas and Oscar weren’t concerning themselves with the thought of defending their title just yet as the pair posed for a selfie which the former Arsenal captain posted on Snapchat.

The Spain international enjoyed a successful return to the English top-flight last season after he helped the Blues win the League Cup and the Premier League.

World Cup winner Fabregas scored three goals and made 18 assists in 34 top-flight games for the west London side last season as he made the PFA team of the year.

How Liverpool must react to Raheem Sterling’s Man City move