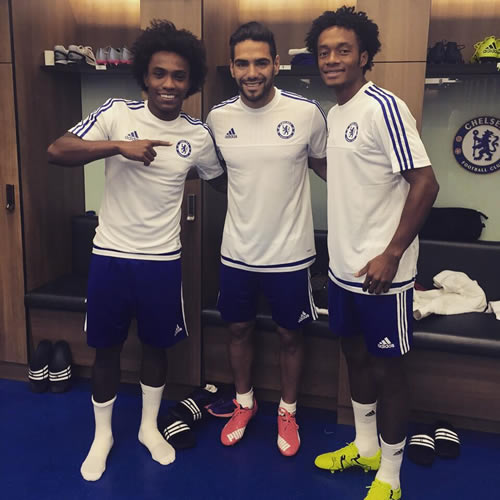 Radamel Falcao has been given a public welcome by his new Chelsea team-mates after the Colombia international linked up with his club for the the first time on Thursday.

The striker was all smiles as he posed for a picture with Willian and Juan Cuadrado in the dressing room following his arrival on the west London club’s pre-season tour of North America.

Falcao, who failed to find consistent form while on loan to Manchester United last season, trained with his new team-mates on Thursday following his loan move to the Stamford Bridge outfit.

Falcao will linked up with his former Atletico Madrid team-mates Thibaut Courtois and Filipe Luis at Stamford Bridge.

The striker memorably scored a hat-trick against Chelsea in a 4-1 victory over the then-Champions League holders in the Uefa Super Cup in Monaco back in 2012.

Photo: Radamel Falcao’s wife delighted to be at ‘marvellous’ Chelsea