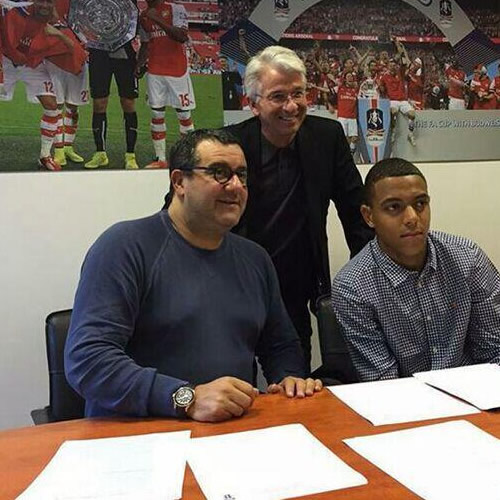 Donyell Malen has appeared to confirm that he has signed a contract with Arsenal via a post on Instagram.

The Gunners have been heavily linked with a move for the 16-year-old forward in recent days as the north London club looked to beat Manchester United to the teenager’s signature.

Now, it appears that Malen has agreed to join the FA Cup winners, as he shared a photo of himself appearing to put pen to paper on a contract with the Gunners on his personal Instagram account.

He is pictured in the photo with Arsenal chief Dick Law and agent Mino Raiola.

Malen deleted the photo from Instagram shortly after, before deleting his account entirely, but the picture has inevitably been doing the rounds on social media.

The striker is thought to have agreed a scholarship deal with the Gunners.

Arsenal are in action in the Community Shield against Chelsea at Wembley on Sunday.

Photo: Man United trio all smiles on flight to Chicago