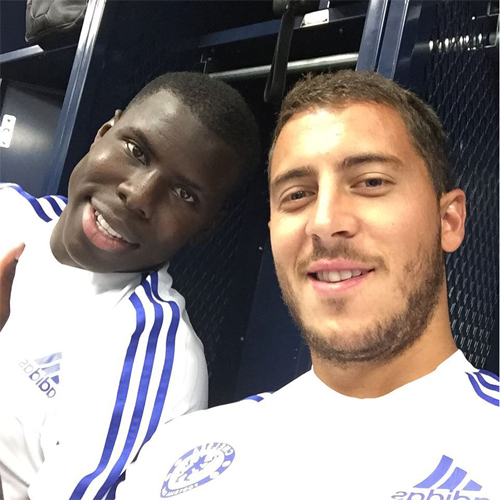 Eden Hazard was all smiles as he snapped a selfie with Kurt Zouma before Chelsea lost 4-2 to New York Red Bulls on Wednesday night.

Jose Mourinho fielded a strong side which included Hazard and Oscar against their Major League Soccer opponents, who fielded a second-string line-up.

Loic Remy had given Chelsea the lead before goals from Franklin Castellanos and 16-year-old Tyler Adams reversed the deficit in front of 23,000 fans.

Red Bulls midfielder Sean Davis scored twice in the second as Belgium international Hazard managed to score what proved nothing more than a consolation.

Hazard had written before the friendly on his Instagram page: “Just before the game with zoumzoum @zoumancee5”

Chelsea manager Mourinho will be tempted to step up his bid for Everton defender John Stones after the west London side’s hapless performance.

Meanwhile, Asmir Begovic, who was signed to replace Petr Cech after the 33-year-old moved to Arsenal, made a number of high-profile errors following his £8m switch from Stoke City.