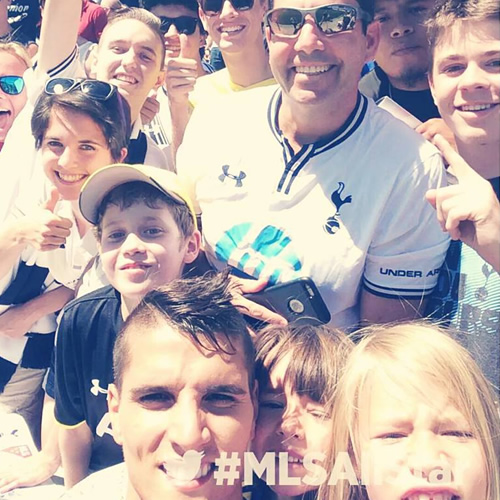 Erik Lamela looked to be in good spirits as he snapped a selfie with some Tottenham fans during the club’s pre-season tour of the United States.

The north London side are currently gearing up for their friendly clash against the MLS All Stars on Thursday as they continue their preparations for the forthcoming Premier League campaign.

And Lamela, who enjoyed an extended summer holiday after his involvement in the Copa America earlier this month, was thrilled to have joined up with Mauricio Pochettino’s men.

The playmaker, who joined Spurs from Serie A side Roma, shared the picture above on his Instagram account and wrote: “Happy to be back training with the team and to meet again with our fans… here selfie with them”

Lamela has been linked with a transfer away from Tottenham in recent days but his latest post on social media suggests that he is happy at the north London club.

Tottenham kick off their Premier League campaign with a trip to Manchester United on the opening weekend of the season.