Photo: Fabregas all smiles in Times Square as Chelsea arrive in New York 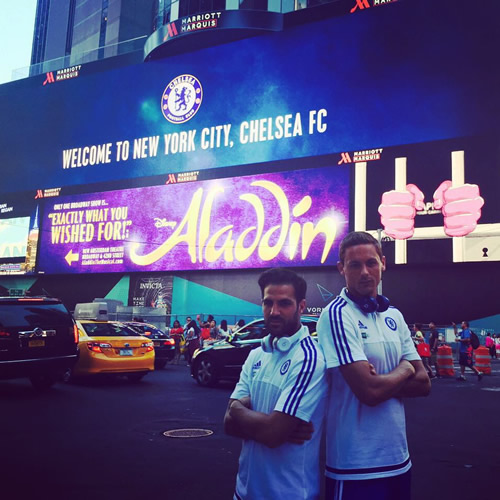 Cesc Fabregas looked to be in good spirits as Chelsea arrived in New York on Tuesday evening as Jose Mourinho’s men get ready to step up their pre-season preparations.

The Blues touched down in New York after a training camp in Montreal last week as they gear up for their top-flight title defence.

Chelsea take on the New York Red Bulls on Thursday, before pre-season clashes against Paris Saint-Germain and Barcelona.

And Fabregas was all smiles as he posed for a picture in Times Square with midfielder Nemanja Matic, where he was welcomed to New York by one of his sponsors.

The Spain international enjoyed a successful return to the English top flight last season after he helped the Blues win the League Cup and the Premier League.

World Cup winner Fabregas scored three goals and made 18 assists in 34 top-flight games for the west London side last season as he made the PFA team of the year.