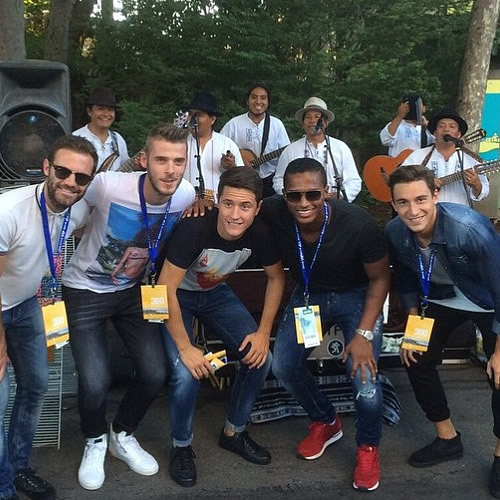 Ander Herrera and David De Gea looked to be in good spirits as they posed for a picture with some of their Manchester United team-mates after enjoying some downtime in Seattle.

The Red Devils are currently in the United States for their pre-season tour as Louis van Gaal’s men continue their preparations for the new Premier League campaign.

Herrera was joined by Juan Mata, Antonio Valencia, De Gea and Manchester United new-boy Matteo Darmian as they went for a stroll around downtown Seattle, and visited the original Starbucks cafe.

And the Manchester United stars also stopped for a photo in front of a South American band.

Valencia uploaded the photo above onto his Instagram account and wrote: “That humility of my colleagues here with my beautiful Ecuadorian people.”

Van Gaal’s men take on San Jose Earthquakes on Wednesday in California after securing a 1-0 victory over Club America on Friday.

The Red Devils kick off their Premier League campaign with a home clash against Tottenham Hotspur at Old Trafford on the opening weekend of the season.