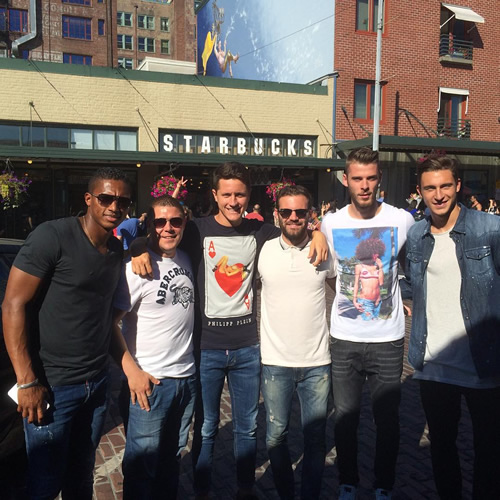 Ander Herrera looked in good spirits as he posed for a photo with some of his Manchester United team-mates in front of the first-ever Starbucks cafe in Seattle.

Herrera was joined by Antonio Valencia, Juan Mata, David De Gea and new signing Matteo Darmian as the Red Devils squad enjoyed some downtime during their tour of the United States on Sunday afternoon.

Herrera shared the picture above on his Instagram account and wrote: “First Starbucks ever with the lads . #mutour #seattle @manchesterunited”

Starbucks opened its first store in 1971 in the Pike Place Market in downtown Seattle.

The Red Devils have already brought in four new players during the summer transfer window ahead of Louis van Gaal’s second season in charge at Old Trafford.

United have signed Memphis Depay, Darmian, Bastian Schweinsteiger and Morgan Schneiderlin as the Red Devils prepare for the 2015-16 campaign.

Photo: Hazard and Fabregas all smiles in Chelsea taxi