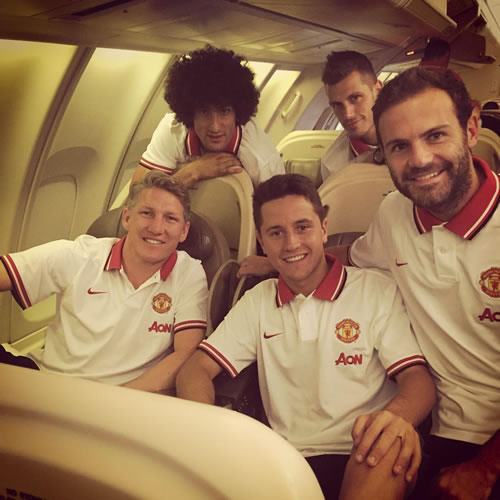 Juan Mata was all smiles as he posed for a picture with Manchester United’s latest signings as the Red Devils prepared to jet off on their pre-season tour.

The Spanish playmaker was joined by new signings Bastian Schweinsteiger and Morgan Schneiderlin, along with Ander Herrera and Marouane Fellaini as Louis van Gaal’s United’ squad prepared to head to the USA to continue their pre-season preparations.

Mata posted the picture above on his Instagram account and wrote: “Let’s go to #USA! Big welcome to our new teammates! #MUtour @manchesterunited”

The Red Devils completed a deal to sign defender Matteo Darmian from Torino on Saturday as Van Gaal bolstered his rearguard options at the club.

United then swiftly announced that they had agreed a deal to sign Schweinsteiger from Bayern Munich over the weekend.

And the Red Devils confirmed that they had concluded a deal to sign Schneiderlin from Southampton on Monday afternoon as the France midfielder became United’s fourth signing of the summer following the arrival of Memphis Depay last month.