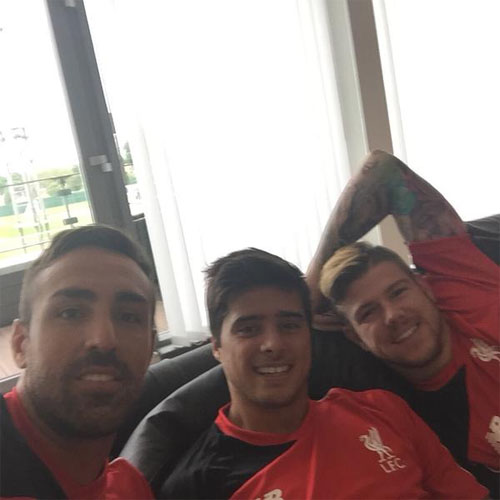 Jose Enrique joined his Liverpool team-mates Joao Teixeira and Alberto Moreno for a selfie upon their return to pre-season training on Monday.

The Spanish pair have certainly made the most of their summer break after having posted a steady flow of photos on their respective Instagram pages.

Enrique and Moreno will be competing for the left-back spot in Brendan Rodgers’s starting line-up for their opening game at Stoke City on 14 August.

But for now at least, the defender are maintaining a friendly rivalry as they posed for a photo with midfielder Teixeira.

Very happy to be back :) pic.twitter.com/ISivA0fYc2

Enrique will be hoping to feature more regularly than last season after the 29-year-old made just four Premier League appearances during an injury-hit campaign.

Moreno, meanwhile, enjoyed a relatively successful first season at Anfield after he moved to the Reds in a £12m deal from Sevilla last summer.