Photo: Liverpool legend catches up with Luis Suarez in LA 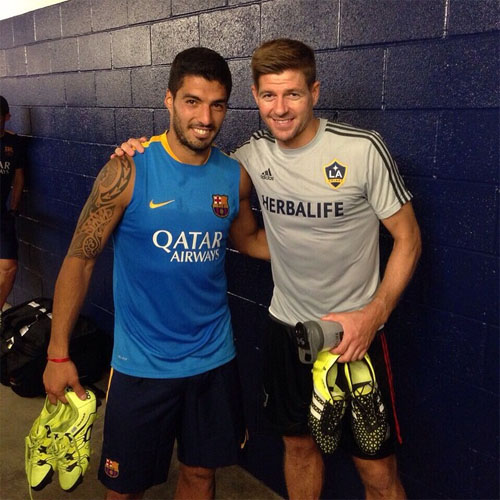 Steven Gerrard managed to catch up with his former Liverpool team-mate Luis Suarez in Los Angeles on Monday.

The former England international completed a move to Major League Soccer outfit LA Galaxy earlier this summer after he called time on his distinguished Reds career.

Gerrard has openly named Suarez as his most-talented Liverpool team-mate during his 17-year spell of dominance at Anfield, playing alongside the Uruguayan for three-and-a-half seasons.

Unsurprisingly, Gerrard, who scored in a 5-2 victory over San Jose Earthquakes at the weekend, was delighted to catch up with the Barcelona striker.

Suarez justified his £75m switch to Camp Nou after the 28-year-old helped to fire Barcelona to Treble glory in his first season at the club.

Gerrard scored a goal, made an assist and won a penalty in his full MLS debut on Saturday as Robbie Keane scored a hat-trick in Galaxy’s seven-goal thriller.