Photo: Liverpool legend hangs out with One Direction star 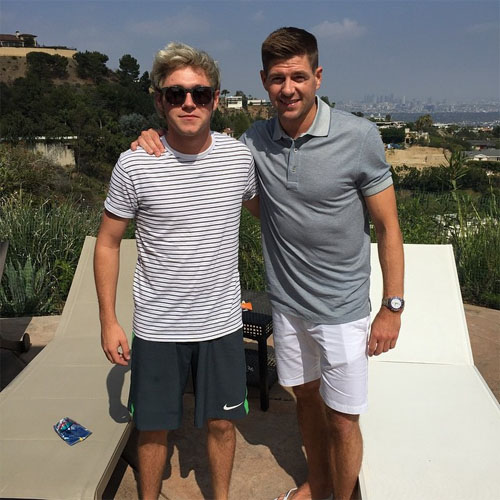 Steven Gerrard is already brushing shoulders with some of the biggest celebrities in Los Angeles despite moving stateside just over a week ago.

The former Liverpool midfielder completed a move to Major League Soccer outfit LA Galaxy after he agreed a move to the American club earlier this year.

Gerrard was introduced to the Galaxy fans at the weekend as the Republic of Ireland international scored a hat-trick in a 3-0 win against FC Toronto.

And the new Galaxy midfielder snapped a photo with another Irishman and One Direction sensation Niall Horan on Wednesday night.

Gerrard wrote the following caption on his Instagram page: “Great to catch up with this fella today @niallhoran .. Thanks for popping in to see the girls mate #superstar”

Liverpool supporters will be relieved to know that it is Gerrard’s daughters – Lily-Ella, Lexie and Lourdes – who are the One Direction fans and not their legendary captain.

Gerrard, who made his final Liverpool appearance ina 6-1 defeat by Stoke City on the final day of the season, is eligible to play for LA Galaxy from 18 July.