Photo: Liverpool legend Steven Gerrard gets his hands on an Oscar 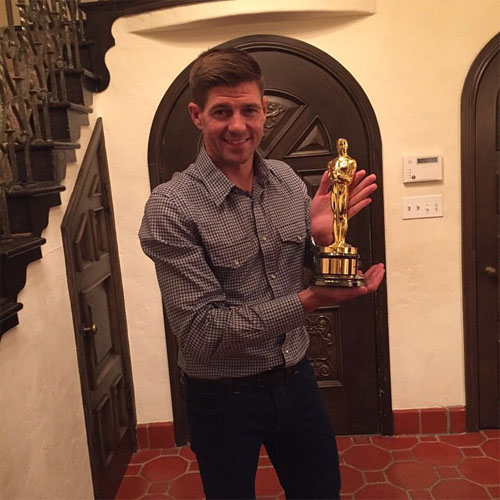 Steven Gerrard could easily be the main protagonist in a biopic on his Liverpool career in the future.

The 35-year-old midfielder went through some unforgettable highs, including the Champions League triumph in Istanbul in 2005, and some scarring lows, most notably his slip against Chelsea which prompted Liverpool’s title collapse.

The former England international moved to Los Angeles over the past week after Gerrard decided to call time on his Reds career to link up with Major League Soccer outfit LA Galaxy.

And the Liverpool legend was chuffed to get his hands on an Oscar on Tuesday night.

Gerrard wrote on his Instagram page: “Day 3 in LA and I get a OSCAR in my hands thanks to the late Mr Lew Wasserman . Respect”

Gerrard scored 186 goals in 708 appearances in all competitions for the Merseyside outfit during a 17-year career at the five-time European champions.