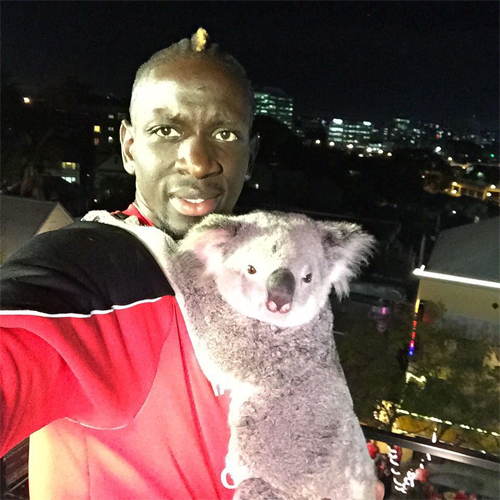 Mamadou Sakho got to hang out with his newest fan in Brisbane during a break from pre-season training with the Liverpool squad.

The Reds made the trip to Australia after the Merseyside outfit were 4-0 winners against True Thai All Stars in Bangkok earlier this week.

Sakho, who spent most of his summer break in his paternal Senegal, scored in their opening win of their tour of Asia and Australia.

However, it was Australian wildlife and not the wild animals of Africa that Sakho was encountering on Wednesday night.

The France defender made 26 appearances for Liverpool in all competitions this term despite a number of injury problems throughout the campaign.

The 25-year-old centre-half completed a £16m move to the Merseyside outfit from Ligue 1 side Paris Saint-Germain in 2013.

The Liverpool defender, who was part of France’s World Cup squad last summer, could feature against Brisbane Roar on Friday night.

Photo: Oxlade-Chamberlain chills with his Arsenal stars by the pool