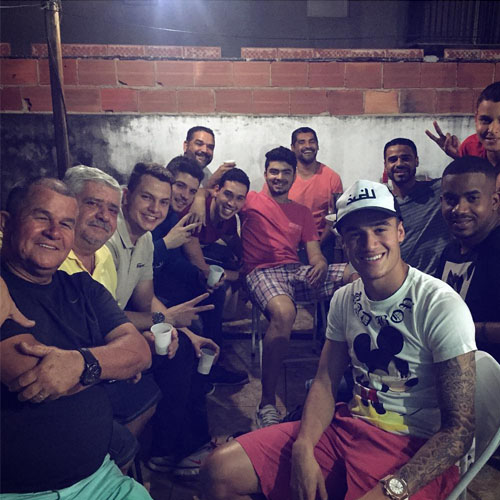 Philippe Coutinho caught up with his group of mates on Friday night as the Liverpool midfielder enjoys a summer break following the Copa America.

The 23-year-old playmaker was unable to inspire A Selecao to continental glory after he was included in Dunga’s squad for the tournament in Chile.

However, Coutinho can take solace from his Premier League season after he was named the fans’s and players’s player of the year in May.

And the South American was catching up with some old friends on Friday night as he posted a snap of his group of pals on his Instagram page.

Coutinho wrote “rapaziada” in his caption, which literally translates to “group of youths”.

Coutinho has scored eight times in 51 appearances in all competitions for the Merseyside outfit this season.

The South American moved to Liverpool from Inter Milan in a cut-price £8.5m deal in the January transfer window 2013.