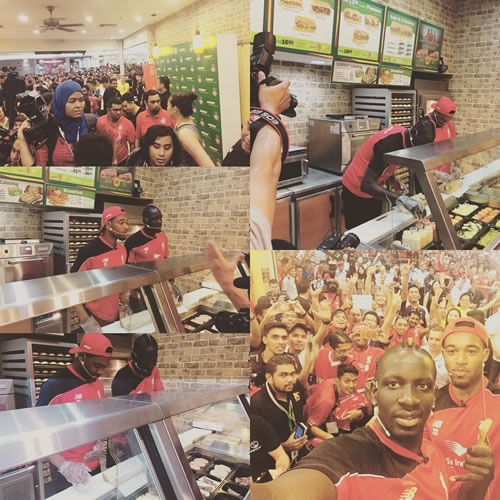 Mamadou Sakho and Jordon Ibe serve up a storm in Subway Photo: Instagram

Mamadou Sakho and Jordon Ibe were all smiles as they dished up some Subway sandwiches for some delighted Liverpool fans as part of the Reds’ pre-season tour.

The Liverpool duo took orders from behind the counter at the Kuala Lumpur store as hundreds of hungry fans flocked to the shop to catch a glimpse of the Reds stars.

The pair served the supporters before posing for photographs, and looked in their element as they took up their new roles for the day.

Ibe has been in good form during Liverpool’s pre-season preparations, and put in a man-of-the-match display against Adelaide United.

Liverpool’s next game is on Friday against an understrength Malaysian XI, kick off 1.45pm BST.

Brendan Rodgers’ men kick off their Premier League campaign with a trip to Stoke City on the opening weekend of the season, after they suffered a 6-1 humiliation at the Britannia Stadium in their last game of the 2014-15 campaign.