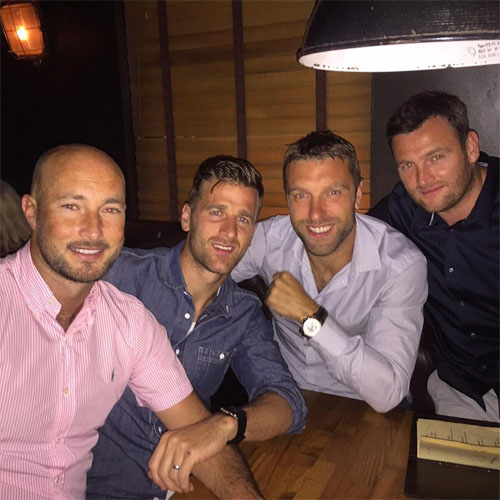 Rickie Lambert is facing an uncertain future at Anfield beyond the summer transfer window, but ex-Newcastle United midfielder Ryan Taylor helped the Reds forward forget about his troubles on Friday.

The 33-year-old striker endured a miserable first season at the Merseyside outfit following his £4m move to Liverpool from Southampton last summer.

Lambert scored two goals and made two assists in 25 Premier League appearances for the Reds, although the England international started just seven top-flight games for his boyhood club.

But the Liverpool man was all smiles as he joined free agent Taylor and some pals for a drink on Friday night.

Taylor posted the above snap on his Instagram page and wrote: “Great time with the lads”

Lambert scored 106 goals in 207 appearances for Southampton during a five-year stay at St Mary’s.

The Reds striker scored three goals in 36 games in all competitions last term, including his first Champions League strike.