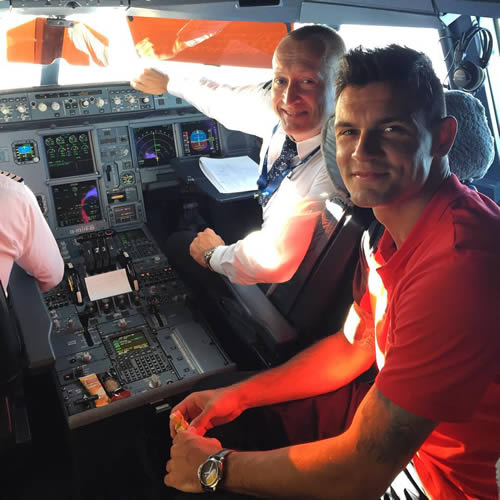 Dejan Lovren was all smiles as he visited the cockpit of Liverpool’s jet as the Reds headed out to Kuala Lumpur for the final stop on their pre-season tour.

The Croatia international looked in good spirits as Brendan Rodgers’ side touched down following their recent visit to Australia.

Lovren uploaded the picture above onto his Instagram account and wrote: “Who else but our man #KualaLumpur”

The Liverpool squad were greeted with an incredible welcome at their hotel after landing in Kuala Lumpur on Tuesday.

Liverpool kick off their Premier League campaign with a trip to Stoke City on the opening weekend of the season – the scene of their 6-1 loss in their final outing last season.

The Reds will be looking to break back into the Premier League’s top four next term after they ended up sixth last season.

Schweinsteiger: It’s an honour to play for Man United with Rooney

Nigel Winterburn: Injury-free Arsenal can challenge Chelsea for the title