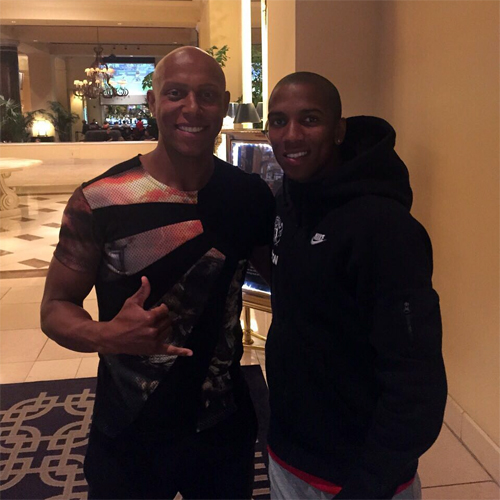 Ashley Young caught up with Jordan Stewart stateside ahead of Manchester United’s friendly against Barcelona on Saturday night.

The Red Devils winger started his career alongside Stewart at Watford before the England international sealed a move Aston Villa in 2007.

Young was part of the United side that were 3-1 winners against Stewart’s current employers, San Jose Earthquakes, at Avaya Stadium earlier this week.

And the 30-year-old uploaded a snap with his former Hornets team-mates after he caught up with the Major League Soccer star in San Jose.

Young wrote on Instagram: “Always good to catch up with this character @jordan.stewart3 #SanJose #ToTheFace”

The former Villa winger enjoyed something of a renaissance under Louis van Gaal last season after he secured a regular spot at left wing-back.

Young, who was part of United’s title-winning side in 2013, scored two goals in 29 appearances in all competitions for the Red Devils.

The 20-time English champions face Barcelona and Paris Saint-Germain in their final games of the pre-season tour of America.

Photos: Van Gaal deep in chat with Schweinsteiger during training

Photo: Mata and Herrera all smiles during Man United tour