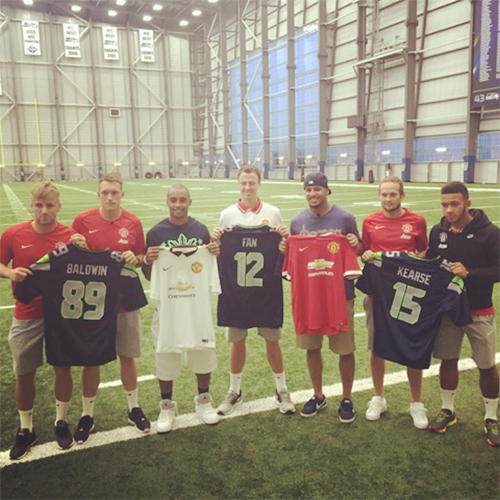 Daley Blind managed to get his hands on a Seattle Seahawks shirt after the Manchester United midfielder met a couple of NFL stars on Saturday.

The Netherlands international is on tour with the rest of the Red Devils squad in the United States as Louis van Gaal’s side get ready for the new Premier League season.

Blind helped United ease to a 1-0 victory over Club America in their first game stateside on Friday night before their clash against MLS outfit San Jose Earthquakes on Wednesday.

And the United squad’s reward for an opening win was a chance to meet with Seahawks stars Doug Baldwin Jr and Jermaine Kearse.

Blind posted on Instagram: “Had a fun afternoon with these guys of the @seahawks thanks for showing us around! @manchesterunited #MUtour #MUFC”

The Red Devils are looking to improve on their fourth-place finish in the Premier League last season.