Photo: Man United trio all smiles on flight to Chicago 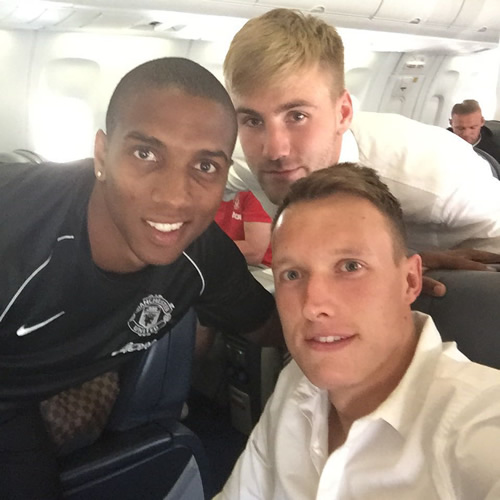 Ashley Young, Luke Shaw and Phil Jones all looked to be in good spirits as they snapped a selfie ahead of Manchester United’s flight to Chicago on Tuesday.

The Red Devils jetted off ahead of their final match of their pre-season tour against Paris Saint-Germain on Thursday.

All three players looked to be in good moods as Louis van Gaal’s men continued their preparations for the forthcoming campaign.

Defender Jones posted the picture above on his Instagram account and wrote: “Last part of the tour, ready for our flight to Chicago! @youngy_18 @lukeshaw23 @manchesterunited #MUtour”

Jones is looking forward to lining up for the Red Devils in Chicago, where he made his Manchester United debut a number of years ago.

The 23-year-old Jones made 22 Premier League appearances for the Red Devils last term.

Manchester United, who finished fourth in Van Gaal’s first season in charge at Old Trafford, kick off their Premier League campaign with a home clash against Tottenham Hotspur on the opening weekend of the season.