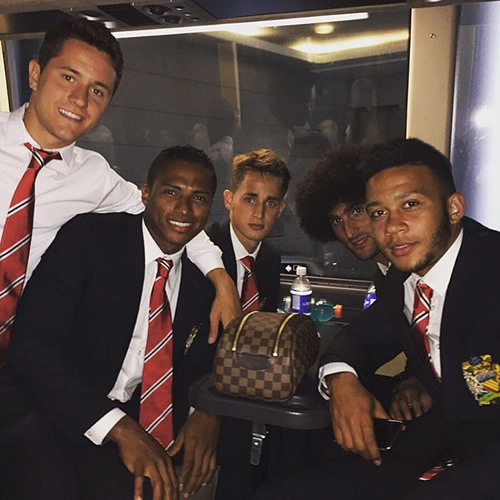 Memphis Depay looked relaxed as he posed for a photo with some of his new Manchester United team-mates as the Red Devils prepared to jet off to San Jose.

The Netherlands international is getting used to life at his new club after joining the Red Devils from PSV Eindhoven earlier this summer.

Depay made his United debut in the 1-0 pre-season friendly win over Club America in Seattle on Friday night.

And Louis van Gaal’s squad headed away from Seattle to prepare for their next game against the San Jose Earthquakes.

The winger posted the picture above onto his personal Instagram account and wrote: “Bye Seattle hello San Jose ✈️👔”

He shared the photo on his Instagram account and wrote: “Ready for our flight to San Jose @manchesterunited #mufctour”