Photo: Mesut Ozil all smiles as Arsenal jet off to Singapore 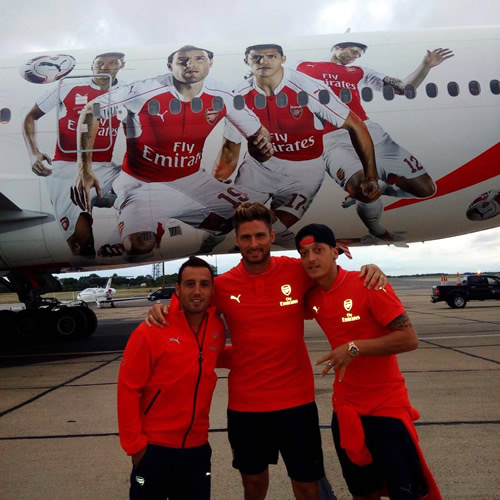 Mesut Ozil looked to be in good spirits as Arsenal prepared for their flight to Singapore for their pre-season tour.

The Germany playmaker returned to London after his summer holidays over the weekend and posed for a snap with Olivier Giroud and Santi Cazorla in front of the Gunners’ Emirates plane.

Ozil posted the picture above of the trio on his Instagram account and wrote: “I had a great weekend at home in London. Looking forward to the start of the pre-season during our Asia tour! 🔜🔛✈ #YaGunnersYa #COYG #emirates”

Ozil, who joined from Real Madrid in 2013, scored four goals and notched up five assists for the Gunners as Arsenal finished third in the Premier League table and qualified for the group stage of next season’s Champions League.

The World Cup winner, who joined Arsenal from Real Madrid in the summer of 2013, missed a large portion of last season due to a knee injury.