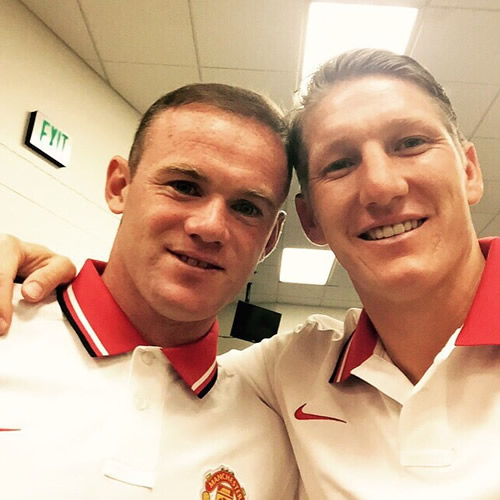 Bastian Schweinsteiger was all smiles as he posed for a selfie with Manchester United captain Wayne Rooney on Saturday morning during the Red Devils’ pre-season tour.

United are currently in Seattle to continue their preparations for the new campaign and secured a 1-0 victory over Club America on Friday night thanks to new signing Morgan Schneiderlin’s goal after five minutes.

Louis van Gaal’s men are set to take on the San Jose Earthquakes in their next tour game on Wednesday, before clashes against Barcelona and Paris Saint-Germain.

And Schweinsteiger, who joined United from Bayern Munich earlier this month, looked in good spirits as he snapped a picture with his captain.

The World Cup winner uploaded the picture above onto his Instagram account on Saturday morning and wrote: “Hi from Seattle with @waynerooney! @manchesterunited”