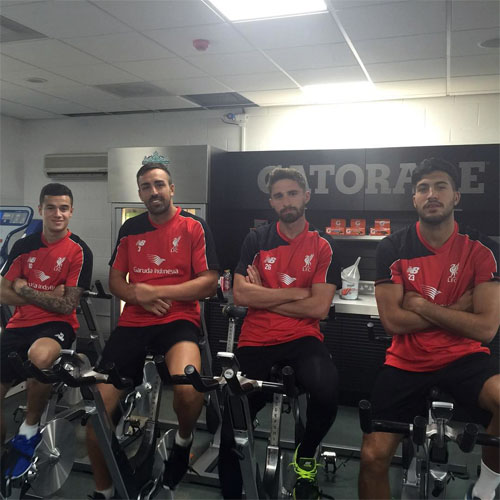 Philippe Coutinho linked up with some of his Liverpool team-mates upon his return to training at Melwood on Tuesday.

The Brazil international was afforded an extended break by the Merseyside club after he featured in this summer’s Copa America.

And Coutinho made his Liverpool comeback for pre-season session with his team-mates Jose Enrique, Fabio Borini and Emre Can on Tuesday afternoon.

Enrique posted the above snap and wrote on Instagram: “Warming up before the afternoon session. Feeling great.”

Coutinho was named the players’s and fans’s player of the year after the South American provided some positivity for the five-time European champions in an otherwise disappointing 2013/14 campaign.

The 23-year-old has netted 16 times in 102 appearances for Liverpool following his £8.5m move to the Reds from Serie A outfit Inter Milan in January 2013.

Coutinho will link up with his national team colleague Roberto Firminho following the playmaker’s £29m move from Hoffenheim this season.

Photo: Liverpool legend catches up with Luis Suarez in LA