Photo: Schweinsteiger and Young all smiles as Man United jet off 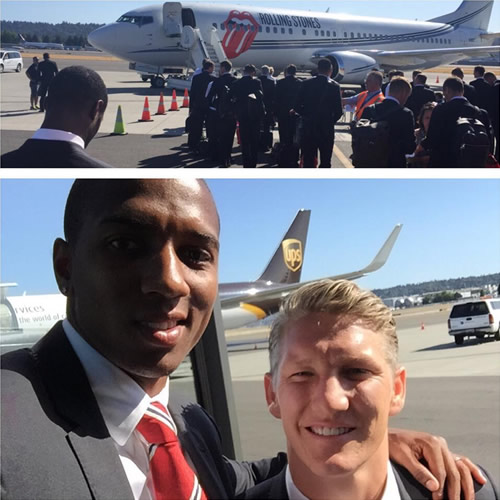 Ashley Young and Bastian Schweinsteiger looked to be in good spirits as Manchester United prepared to jet off to San Jose on Monday.

The Red Devils left Seattle to head onto the next leg of their pre-season tour as they prepare for this week’s clash against the San Jose Earthquakes.

Schweinsteiger looks to have already settled in well with his new team-mates following his arrival at the club from Bayern Munich earlier this month.

And the Germany international was more than happy to pose for a selfie with Young as United prepared for their flight away from Seattle on Monday.

Young posted the picture above on his personal Instagram account and wrote: “Thanks Seattle, San Jose next! #MUtour”

Schweinsteiger made his first appearance in a Manchester United shirt during the 1-0 win over Club America on Friday night.

Manchester United kick off their Premier League campaign with a home clash against Tottenham Hotspur at Old Trafford on the first weekend of the 2015-16 campaign.