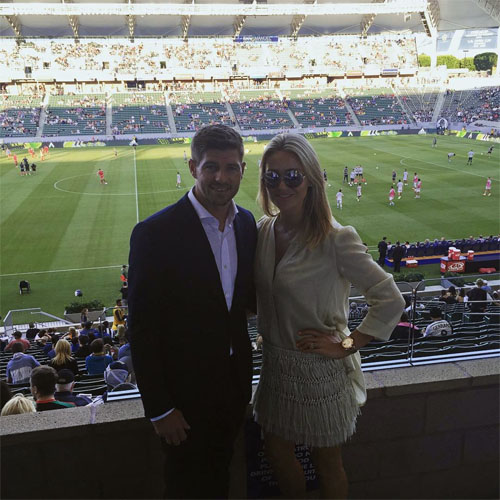 Steven Gerrard got to watch his new LA Galaxy team-mates at the Stubhub Center for the first time on Sunday morning.

The former England captain has made the move stateside after he called time on his Liverpool career in May.

Gerrard, who enjoyed a 17-year career at Anfield, is set to link up with his former Reds team-mate Robbie Keane at the Major League Soccer club.

And the Liverpool legend posed for a photo alongside his wife Alex at LA Galaxy’s home ahead of their 4-0 victory over FC Toronto on Sunday morning.

Gerrard wrote: “Both myself and @alex_gerrard8 looking forward to watching @lagalaxy v #Toronto at the Stubhub Center. Come on the boys!”

Perhaps signalling to Gerrard that he won’t be the only superstar at LA Galaxy, Republic of Ireland captain Keane scored a hat-trick in their 4-0 win against Toronto.

Gerrard, who made his final Liverpool appearance ina 6-1 defeat by Stoke City on the final day of the season, is eligible to play for LA Galaxy from 18 July.