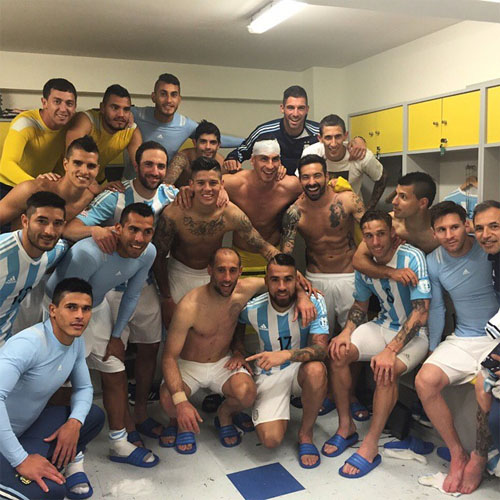 Erik Lamela posted a dressing room snap with his Argentina team-mates after they booked their place in the Copa America final in the early hours of Wednesday morning.

La Albiceleste were 6-1 winners against Paraguay in their semi-final after Angel di Maria’s brace and goals from Marcos Rojo, Javier Pastore, Sergio Aguero and Gonzalo Higuain.

Tottenham’s club-record signing Lamela was an unused substitute in the last-four clash after Argentina teed up a final against Copa America hosts Chile on Saturday.

And the £31.5m signing snapped a photo with his team-mates, including Pablo Zabaleta and Carlos Tevez, after their emphatic semi-final win.

Lamela wrote on his Instagram page: “Let’s go Argentina … just a step nothing more … we go we go !!!”

The 23-year-old scored five goals in 42 appearances in all competitions for Tottenham last season.

The Argentina midfielder has netted six goals in 59 games since his move to White Hart Lane.

Lamela moved to the north London side from Serie A outfit Roma in 2013.

Watch Chelsea defender hit the gym solo ahead of pre-season