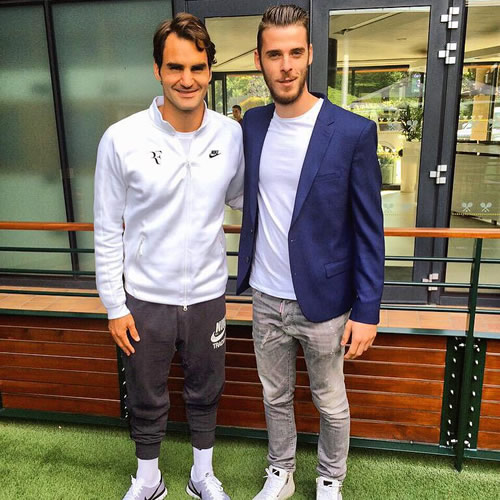 David De Gea put the speculation surrounding his Manchester United future to one side on Wednesday as he travelled to Wimbledon to watch some tennis with Juan Mata.

The Spanish duo reported back to United’s Carrington training ground earlier this week as Louis van Gaal’s side began their pre-season training sessions.

The Red Devils have been training to build up their fitness this week ahead of their pre-season tour to the United States next week, before the 2015-16 season kicks off next month.

Mata and De Gea made the most of some downtime on Wednesday afternoon as they travelled down to London to catch some of the men’s quarter-final clashes at The All England Club.

The United duo caught up with Roger Federer after the Swiss maestro booked his place in the semi-finals at Wimbledon, where he will face Andy Murray on Friday.

Goalkeeper De Gea, who has been heavily linked with a move to Real Madrid in recent weeks, posted the picture above on his Instagram account and wrote: “Maestro #rogerfederer #legend 🎾 #wimbledon”

Spanish playmaker Mata, meanwhile, shared the photo below on his own account and added: “He just makes it look so easy. #legend #tennis #wimbledon @rogerfederer”