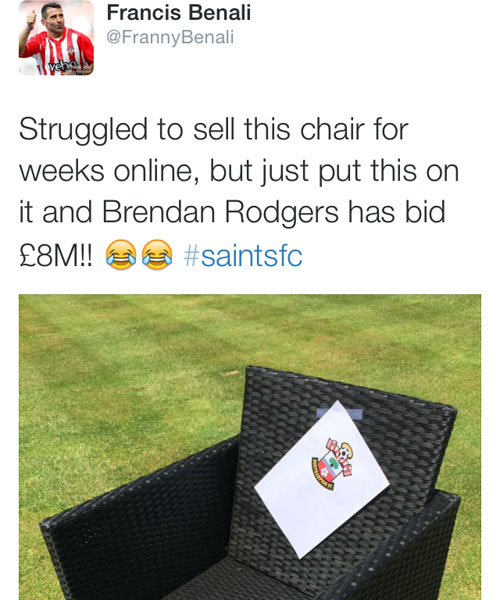 Francis Benali shared a joke at the expense of Brendan Rodgers on social media after Liverpool completed the signing of Nathaniel Clyne from Southampton on Wednesday afternoon.

The England right-back penned a five-year deal with the Merseyside outfit after Liverpool agreed a reported £11.5m deal with the south coast club for the defender’s services.

Clyne’s move to Anfield from St Mary’s means the Reds have paid Southampton a staggering £61.5m over the past 12 months following the sales of Adam Lallana, Dejan Lovren and Rickie Lambert.

And Southampton legend Benali joked that Liverpool manager Rodgers had submitted a bid for an unwanted garden chair on his Twitter page.

Struggled to sell this chair for weeks online, but just put this on it and Brendan Rodgers has bid £8M!! 😂😂 #saintsfc pic.twitter.com/Mi67m4yQo5

Ronald Koeman’s Southampton ended the 2014/15 campaign in eighth place after a promising first campaign under the Dutch coach.

Clyne is Liverpool’s sixth signing of the summer transfer window so far.

Michael Owen: How Liverpool signing Nathaniel Clyne will have to improve