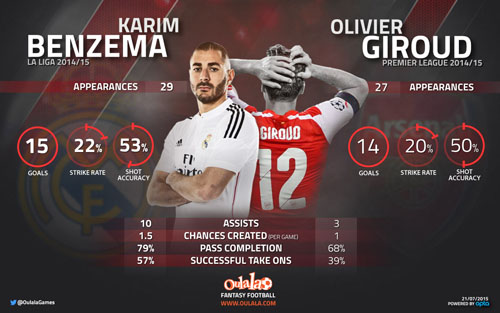 How does Karim Benzema compare to Olivier Giroud? Photo: www.oulala.com

Arsenal are set to put all their eggs into one basket after they gave up on Napoli’s Gonzalo Higuain and lodged a £31m bid for Real Madrid striker Karim Benzema.

Their offer was quickly rejected by the La Liga club. However, recent reports suggest that Madrid are open to offers for the striker amid claims that Rafael Benitez has targeted Borussia Dortmund’s Marco Reus to form part of a new-look Real, leaving the Frenchman surplus to requirements.

Stats from Opta-powered fantasy football game www.oulala.com show that Arsenal must now go all out in their pursuit of the Real Madrid hitman if they wish to put up a serious title challenge in the Premier League next season.

Fellow French striker Olivier Giroud impressed last season with 14 league goals in 27 games. The 28-year-old ranked fourth in the Premier League for goals per game, behind Sergio Aguero (0.79), Diego Costa (0.77) and Harry Kane (0.62) with an impressive rate of 0.52.

Benzema also excelled creatively. With three times as many assists (10 to 3), more chances created per game (1.5 to 1) and also led his countryman for pass completion (79% to 68%). The stats underlining the benefits that Benzema would bring to Arsenal’s renowned style of play.

The stats also show that Benzema has more weapons to his armory. The Real Madrid man successfully completed 57% of his attempted take-ons in La Liga last season to just 39% from Giroud. Another quality that would undoubtedly compliment Arsene Wenger’s side.

Reports from Spain suggest that new Madrid manager Rafa Benitez plans to utilize one of either Cristiano Ronaldo or Gareth Bale in a more central role, thus having a significant impact on Benzema’s playing time.

In-turn, this has also alerted Manchester United to Benzema’s potential availability. Being over-patient in previous seasons has cost Arsene Wenger important transfer targets. However, with the swift capture of Petr Cech this summer, could the Arsenal boss follow this up with another signing of intent before the new season begins?