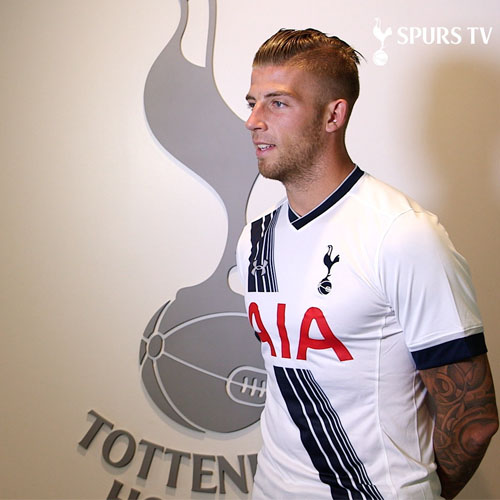 Toby Alderweireld says he is thrilled to complete his dream move to Tottenham Hotspur.

The Belgium international signed a long-term deal with the north London side after Spurs agreed a reported £11.5m fee with Atletico Madrid.

Alderweireld will link up with his compatriots Jan Vertonghen, Moussa Dembele and Nacer Chadli at White Hart Lane.

And Tottenham’s first signing of the summer spoke of his pride to seal a switch to the League Cup runners-up.

“From the beginning I knew a lot about it (the club) from Jan Vertonghen, Mousa Dembele and Nacer Chadli.

“It’s a big club and it’s always been a dream to play at a club like Spurs. Now that dream is coming true so I’m very happy, very proud and I will give my best.”

Alderweireld scored one goal in 25 Premier League appearances for Southampton last term during his season-long loan from Atletico.

The 26-year-old was regularly linked with a potential summer switch to Spurs despite Ronald Koeman expressing an interest in signing the defender on a permanent deal.

And the Spurs signing admitted that he is looking forward to linking up with his former Ajax team-mates Christian Eriksen and Vertonghen as well as his compatriots Chadli and Dembele.

“I know the players from the national team and I played with Jan at Ajax, we had a central defensive partnership,” Alderweireld added.

“It’s nice when you join another club that you know a couple of players. I hope to get to know them a little better now.”