Photo: Alexis Sanchez snuggles up with his best friends ahead of Arsenal clash 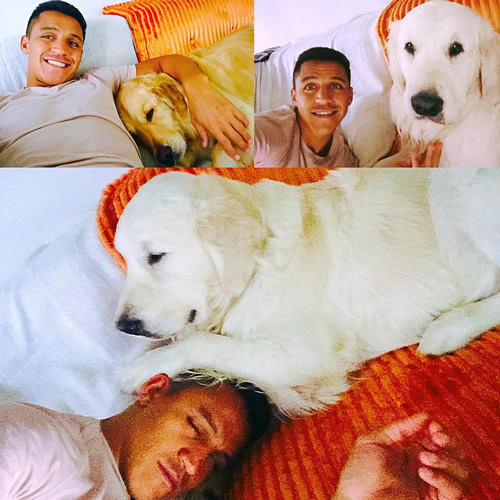 Alexis Sanchez caught some shut-eye with his two pet dogs on Thursday night as the Chile international prepares for Arsenal’s trip to Crystal Palace on Sunday.

The Gunners playmaker was a second-half substitute as the north London side slumped to a shock 2-0 loss to West Ham United at Emirates Stadium in their Premier League opener on Saturday.

Sanchez only returned to pre-season training with Arsenal last week but Arsene Wenger confirmed on Thursday that the 26-year-old is in contention to start this weekend’s clash at Selhurst Park.

And the forward, who was granted an extended summer holiday following his involvement in the Copa America, snuggled up to his dogs Atom and Humber as he prepared for bed on Thursday night.