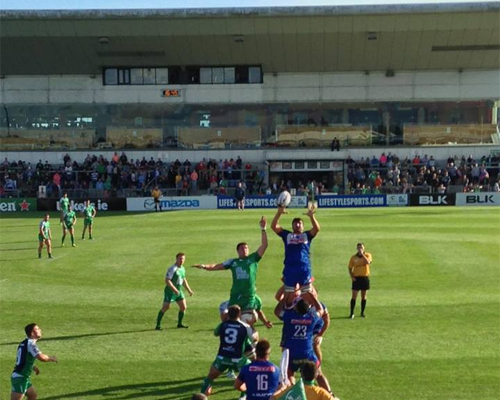 Pat Lam named what was an experienced starting XV for the first of their three pre-season games ahead of the start of the Pro12 in September. The likes of captain John Muldoon, Tom McCartney and Fionn Carr all started, but flattered to deceive in what began with a very promising opening for the westerners. From the start Connacht applied relentless pressure on the French visitors with the Connacht scrum dominating every encounter. The early pressure from Lam’s men resulted in four early penalties, as Grenoble struggled to get to grips with the early intensity. Connacht were camped in the Grenoble 22 with the Top 14 team struggling to repel the green waves. As Connacht bossed the breakdown, they heaved the Grenoble pack backwards, and the ball was released to Jack Carty, the Athlone man dashed over the Grenoble try-line on seven minutes to put Connacht’s first points on the board. Carty missed the conversion and there would be an immediate reply from the Grenoble team, as the French outfit worked their way to the edge of the Connacht 22. Out-half Clement Gelin lofted an up-and-under to the Connacht wing and flanker Mahamadou Diaby caught and grounded the ball. James Hart missed the following conversion and the scores were level at 5-5. It was a lively opening to the game and looked set to be a competitive encounter, as on 19 minutes Danie Poolman sprinted down the left wing, chipped over the top, catching his kick, but was bundled into touch by Xavier Mignot. Carty turned creator as he dashed for the line off another dominant Connacht scrum. He offloaded in the tackle and sent Ian Porter over for Connacht’s second. Carty converted to put Connacht 12-5 up with 23 minutes played. But that was as close as Connacht would push the tie, as two tries before half-time from Dubliner James Hart and Fabrice Estebanez pushed the French side out to a 19-12 lead.

In a reversal of the first-half, it was Grenoble who applied the early pressure and to good effect. The forwards gathered from a line-out on the 22 and barrelled their way down to the Connacht try-line. The ball was released to the backs, with Daniel Kilioni eventually touching down. The ever-reliable Gelin tacked on the extra points to make it 24-12 to the French side with 45 minutes gone. There is a strong Irish contingent in the Grenoble team, not least, head coach and ex-Connacht man, Bernard Jackman. It was one of his Irish recruits who would go over next for the French side as Belfast born Chris Farrell scored on 55 minutes to push Grenoble into an unassailable 33-12 lead. As the second-half ticked on and the Connacht players tired under the Galwegian sun, the French flair was turned on. A quick droup-out from their own 22 resulted in a fantastic team try that ended with Armand Battle touching down in the corner for Grenoble’s sixth try of the evening. In truth, Jackman’s men looked like scoring at will, especially when the ball was moved wide. Two more tries would follow for the French team who play their rugby at the Stade des Alpes. Nigel Hunt and Killoni would grab his second and Grenoble’s eight try of the evening, with Grenoble running out comfortable 52-19 winners.

It wasn’t all bad for Connacht after the heavy defeat. While some of the elder statesmen of the Connacht team failed to stamp their authority on the game, some of the younger players and debutants signalled their intent for the forthcoming season with some good performances. Ultan Dillane put in a fine 60 minutes in the second-row, making two bone-crunching hits in the first-half, with one coming smack-back on the 30-minute mark. Rugby union convert and new boy Api Pewhairangi almost caught an intercept try on 16 minutes, but failed to gather and had a lively start to life at his new home at The Sportsground. Carty’s first-half try and assist showed he has started where he left off at the end of last season. New recruit and debutant Ben Marshall capped off his first game in the green of Connacht with a try, as he crashed over to the delight of the Sportsground on 63 minutes. Other notable displays from Connacht youngsters, came from Shane O’Leary as he converted Marshall’s try and kept the Grenoble defence honest.

Ashes 2015: 11 Talking points from day one at Trent Bridge