Marcos Rojo enjoyed some downtime with his family on Sunday night 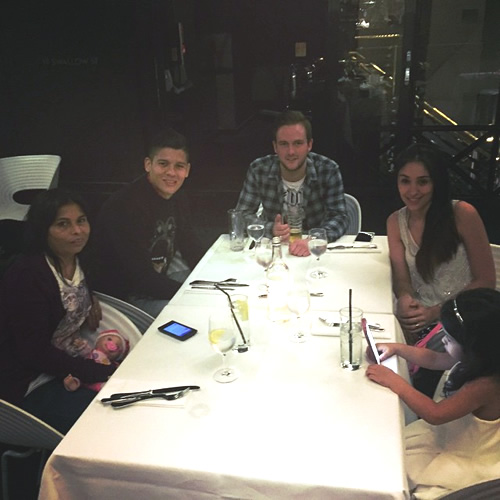 Marcos Rojo enjoyed some downtime with his family on Sunday evening after Manchester United’s 1-0 win over Tottenham in their Premier League opener.

The Argentina international did not feature against Spurs following his late return from his summer holiday but watched his team-mates secure victory over the north London side thanks to Kyle Walker’s first-half own goal at Old Trafford.

Rojo enjoyed a meal with his girlfriend and daughter on Sunday evening as he prepares to continue working on his fitness.

He shared the photo above on his Instagram account on Sunday and wrote: “Dinner with my family, a beautiful moment with them.”

Rojo only returned to pre-season training with United earlier this month after being given an extended summer holiday following his involvement in the Copa America with Argentina.

The defender, who moved to Old Trafford from Sporting Lisbon last summer, will be hoping to prove his fitness ahead of Manchester United’s trip to Aston Villa in the Premier League on Friday night.

Rojo also took to Instagram after Manchester United’s win over Tottenham, posting the picture below and writing: “It’s always important to start the championship on the right foot. A good victory against a complicated rival, congrats team! #MUFC #RojoIsRed #PremierLeague”

Jamie Carragher: Why Liverpool’s win was so important