Mario Balotelli may be pondering ‘why always me?’ after the striker secured a season-long loan at AC Milan on Thursday.

The Italy international is fast becoming a modern-day Steve Claridge as his journeyman career continued following his return to the San Siro just 12 months after he moved to Liverpool from the Rosaneri in a £16m deal.

Jamie Carragher was among the first to welcome news of Balotelli’s imminent loan move to Italy earlier this week. The Liverpool legend didn’t hesitate to criticise Brendan Rodgers and the club’s transfer committee for what he described as a “major mistake”.

Carragher clambered to take the morale-high ground and claimed to have had the foresight to predict Balotelli’s move to Anfield was doomed from the day he stepped inside Melwood training ground.

But the Champions League winner received a timely reminder of his apparent stance last August after a quote surfaced of the retired Liverpool defender hailing the £16m fee as a bargain for the Italy international.

In Carragher’s defence (if the quote is indeed legitimate), he is among the many and not the few who felt Balotelli’s price tag represented fair value for a striker with some goal-scoring pedigree.

How did Balotelli manage to convince so many seasoned football heads that he had the drive and talent to succeed at Liverpool? A return of 30 goals in 54 games for Milan appeared to show a striker who had rededicated himself to his trade. Let’s not forget he is a Premier League, Serie A, Champions League and FA Cup winner, too.

Regrouping following Luis Suarez’s £75m move to Barcelona, Liverpool supporters were quick to welcome Balotelli’s arrival as Rodgers replaced one flawed maverick with another who had even deeper-lying issues than his Uruguayan predecessor.

Still dining on the Suarez legacy, many predicted Rodgers would utilise his man-management skills to out-coach Roberto Mancini and Jose Mourinho and transform Balotelli into the player that his former team-mates, ex-professionals and supporters believed existed behind his court-jester facade.

Moments like handing one young fan a ball over the training ground wall helped to keep Liverpool supporters on side despite an underwhelming start, but by the time his first Premier League goal came in March, most had accepted Balotelli wasn’t the saviour.

His end-of-season Instagram post which displayed a shackled Balotelli accompanied by the caption, ‘Thanks to Liverpool fans for this year …. I’m loading for next season #beast’, was a defiant statement which underlined his desire to prove his talent at Anfield. 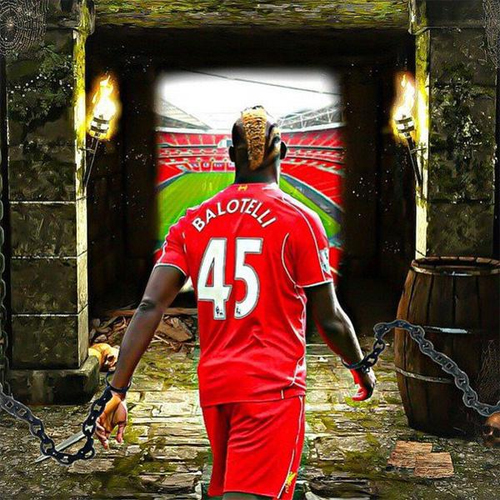 But he wasn’t given the chance as Rodgers ran out of patience as pressure intensified on the Liverpool manager following a disappointing season, prompting the Reds to sign Christian Benteke in a £32.5m deal from Aston Villa.

While Balotelli has blamed his manager’s tactics for his return of four goals in 26 games – and others will point to the absence of Daniel Sturridge, who was touted as an ideal striker partner for the Italian – there is no disguising that he lacked appetite and determination, which is a cornerstone of most Liverpool sides.

And it is perhaps telling only fellow Liverpool outcast Jose Enrique took to social media to wish Balotelli good luck upon his return to AC Milan.

In his first interview with Gazetta dello Sport, the Milan signing was quick to emphasise that his behaviour was good and he trained hard at Anfield, something which contradicts this Liverpool Echo article.

Irrespective of his disappointing spell at Anfield, much to Carragher disbelief, another European giant has taken a calculated gamble on Balotelli with the ink drying on a contract full of strict guidelines for the striker.

So why always Mario? The Italian striker may fancy himself as a joker, but he also shares similarities with another great movie character: Keyser Soze.

The greatest trick Mario ever pulled was convincing the world his talent did exist.