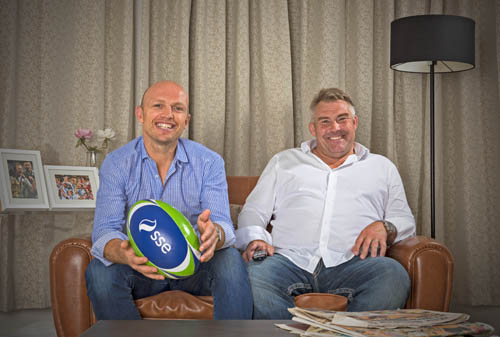 Matt Dawson is worried the England half-back conundrum facing boss Stuart Lancaster next month is in danger of derailing the World Cup challenge.

Dawson, who has 77 England caps and a further seven for the British & Irish Lions, was a mainstay of the 2003 World Cup winning side, forming a formidable half back pairing with the mercurial Jonny Wilkinson.

Fast forward 12 years and it’s a very different story for Lancaster on the eve of a home World Cup – the England boss seems undecided whether Saracen Owen Farrell or Bath’s George Ford is his go-to man at No.10.

While the scrum half debate is just as confused, with Leicester’s Ben Youngs the man in possession of the jersey presently after a successful Six Nations but Harlequin Danny Care and Saracen Richard Wigglesworth are also firmly in the frame to start against Fiji in England’s World Cup opener on September 18 at Twickenham.

In 2003, Sir Clive Woodward’s premier XV picked itself, with just Josh Lewsey forcing his way into the starting line-up in the final 18 months before the tournament started in Australia.

But on the eve of the World Cup, few positions in Lancaster’s starting XV seemed nailed down and with a group of death that includes Wales, Australia and Fiji – England stand on the brink of a huge challenge to simply progress from their pool.

“The England fly-half situation is not too dissimilar to my early years when it was always to-ing and fro-ing between Paul Grayson and Jonny Wilkinson,” said Dawson.

“There is no stand-out fly-half now like Jonny was in 2003 but I think right now going into that Fiji game George Ford just about has an edge.

“The Ireland warm-up game could be a dress rehearsal. The England fly-half situation is not too dissimilar to in my early years when it was always toing and froing between Paul Grayson and Jonny Wilkinson.

“There is no stand-out fly-half now like Jonny was in 2003 but I think right now going into that Fiji game George Ford just about has an edge.

“The Ireland warm-up game could be a dress rehearsal for which person plays fly-half – do they get half each against Ireland and battle it out.

“I thought George Ford bounced back from having a couple of dodgy moments in the first half against France, he actually finished the game really well.

“It’s far from ideal though and I think England would rather be in a situation like we were in 2003 – you knew who started in the key positions.

“It’s also a tricky one at scrum-half because if you want someone to come on and take quick tap penalties and spark it up and go for it, then of course you’re going to go with Danny Care.

“However, if Ben Youngs goes down in the first five minutes, you’re probably going to want Richard Wigglesworth to run the game and manage the game tactically.

“Strategically Richard Wigglesworth has proven to be a little bit better in that area than Danny Care at England level. But one of the reasons that all three of them will go is that Stuart has that ability to pick his bench accordingly.

“Ben Youngs is your all-round and a good mix of Wigglesworth and Care’s qualities so he can do all of that. It’s quite a tricky one but I wouldn’t be surprised if Stuart Lancaster probably sticks with Wigglesworth as his second choice and Care as third.

“And then possibly mixes it up depending on the opponent but always my worry is not about who comes on with ten minutes to go.

“My worry is what happens when they go down in the first ten minutes, with a key decision maker like that, you’ve got to have someone who is right on game plan.”

The film documents England’s journey to the top, including that last gasp drop-goal from Jonny Wilkinson, which went down in history and secured England the win. The film also includes never-before-seen exclusive interviews with Jonny Wilkinson, Sir Clive Woodward and Martin Johnson.

“It brought back a lot of different types of memories, which is what I was hoping for,” added Dawson.

“I think the perspective that they’ve tried to get from such greats as Martin Johnson, Jonny Wilkinson and Clive Woodward but then if you’re a fan, just a general sports fan, it will take you back to what it was like at that time.

“I quite enjoyed that and there were some memories that you think oh my god I didn’t enjoy that one bit.

“But then even some of the press conferences you then think back and realise because there are a lot of things you don’t see because you’re training or playing.

“You don’t see those bits those little nuggets so it was a great trip back through memory lane.

“I think a lot of the players were just wrapped up in what they were doing and saw him as just an obsessive guy with his goal-kicking but there was a lot more to it than that so it was really interesting.

“Everybody was dedicated to being successful to varying degrees but there was sacrifice and dedication from everybody in that squad.

“Jonny happened to take it to a super-human level but as you will see with the film you know where it’s come from, he explains it very eloquently where you get that now, you get why he is the way he is.

“We pretty much knew everyone so well – Jonny kept himself to himself a little bit more but the lighter side to Martin Johnson is one I know he is capable of as much as the hard-nosed, abrasive rugby player.

“He’s always had a good sense of humour and the same can be said for Clive, George Gregan and other guys in the film.

“That perspective is great for the fan because you have an insight into what makes those guys tick.”

Leading energy company SSE is the Official Presenting Partner of Building Jerusalem and is giving its customers an exclusive ticket offer for the one-night-only cinema release on 1st September via ssereward.com