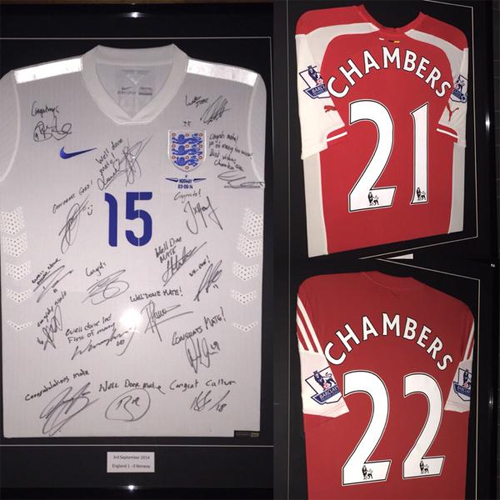 The 20-year-old defender moved to the Gunners in a £16m deal from Southampton last summer as he followed in the footsteps of Alex Oxlade-Chamberlain and Theo Walcott.

Chambers went on to make his Arsenal and England debuts in the opening couple of months of his career at The Emirates as well as winning the Community Shield at Wembley.

Although the versatile youngster fell down the pecking order in the second half of the season, Chambers still collected a FA Cup winner’s medal following a 4-0 win against Aston Villa.

And the Arsenal centre-half decided to get his Arsenal, England and Southampton debut shirts framed to put on display at his home.

My debut shirts. Just got these framed and hung up in my house! Good memories and proud moments in my career! pic.twitter.com/yU8wVJb9sQ

Chambers scored one goal in 23 Premier League appearances for Arsenal in the 2014/15 season.

The Gunners defender played in a total of 36 games in all competitions in his first campaign in north London.