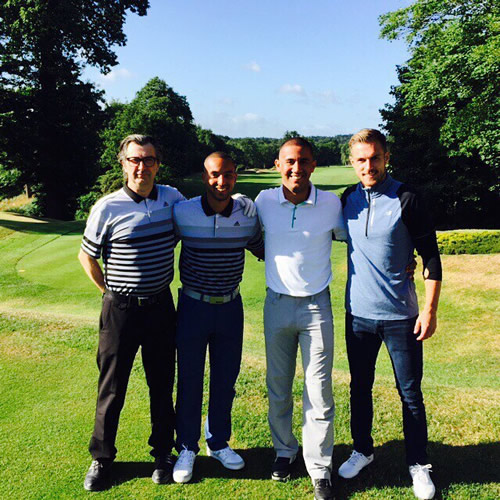 Aaron Ramsey and Theo Walcott were all smiles as they enjoyed a spot of golf on Tuesday afternoon following Arsenal’s Community Shield win over Chelsea on Sunday.

Both Walcott and Ramsey featured from the start at Wembley as Arsene Wenger’s men ran out 1-0 winners over the defending Premier League champions thanks to Alex Oxlade-Chamberlain’s first-half goal.

And the Gunners duo enjoyed some well-earned downtime on Tuesday as they played some golf with their friends at Wentworth.

Wales international Ramsey shared the photo above on his personal Instagram account and wrote: “Golf at Wentworth with Daniel, @theowalcott and Jake”

Meanwhile, Arsenal star Alexis Sanchez spent the night in Paris ahead of his return to the north London club.

The Chile international has been enjoying an extended summer break after helping his side taste Copa America glory last month.

Arsenal get their Premier League campaign under way with a home clash against West Ham United at Emirates Stadium this weekend.