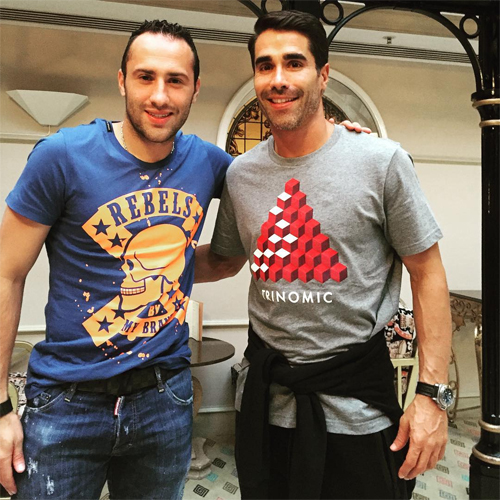 Juan Pablo Angel and David Opsina are just two of a select group of Colombians to have played in the Premier League.

The Arsenal goalkeeper still has some way to go to emulate the retired striker’s record in the English top-flight after Angel scored 44 times in 175 Premier League games for Aston Villa.

Opsina, meanwhile, has made just 18 league appearances for Arsenal after he managed to usurp Wojciech Szczesny and take the number one spot at The Emirates last season.

And Angel caught up with his compatriot in London after spending time with some Chelsea players earlier on Wednesday afternoon.

Ospina has fallen down the pecking order at Arsenal this season following Petr Cech’s £11m move to the north London side from Premier League champions Chelsea earlier this summer.

Angel scored 272 times in 717 games throughout his 21-year career as a professional footballer.