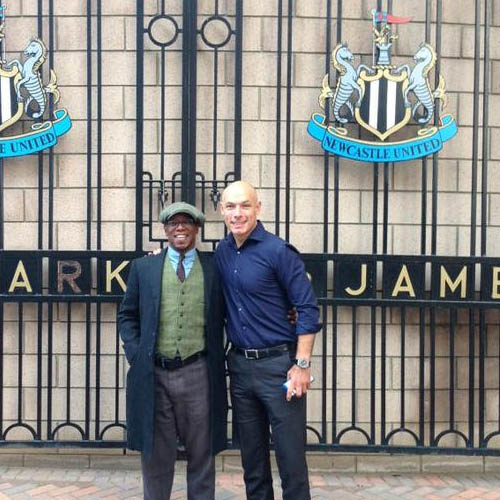 Ian Wright will be part of BT Sport’s punditry line up covering Arsenal’s game at Newcastle today, and has posted a photo alongside former referee Howard Webb.

Former Fifa official Webb, who took charge of the 2010 Champions League and World Cup finals, is also a member of the BT Sport team as he gives feedback on important refereeing decisions during the channel’s coverage of matches.

The 44-year-old was regularly accused of bias against Arsene Wenger’s side during his 11-year Premier League career, an opinion not lost on Wright who took the chance to pose for a photo.

Me and @howarmwebb at the Geordie gates. @by sport #COYG pic.twitter.com/qDYelR1lbw

Wright, who made over 600 career appearances and averaged a goal every other game, showed his prowess in front of goal is not mirrored in his social media skills, with a series of misspelt Twitter tags.

The 51-year-old scored 185 goals for Arsenal during a seven-season Highbury stay.

Arsenal played out a goalless draw with Liverpool last weekend.

Ian Rush: Liverpool a force to be reckoned with