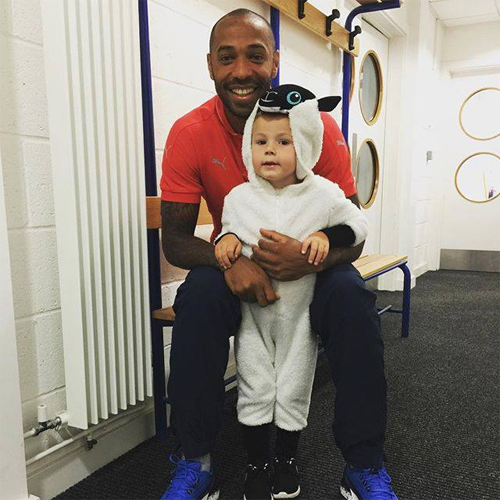 Jack Wilshere had the honour of introducing the most important person in his life to the greatest player in Arsenal’s history on Saturday.

The Gunners midfielder has a three-year old son called Archie as well as a young daughter named Deliah.

Wilshere, who is currently recovering from injury, regularly plays the doting father on social media with snaps of his two children.

And the 23-year-old’s oldest child Archie was introduced to former Arsenal striker Henry dressed as a sheep on Saturday.

Wilshere wrote on his Facebook page: “The Legend and the Sheep”

Somehow we reckon Wilshere may have some explaining to do when Archie reaches his teens for the costume.

The England international missed Arsenal’s first game of the season due to hairline fracture in his right ankle on 1 August.

However, Gunners manager Arsene Wenger confirmed Wilshere could be ready for a return to the first-team in two weeks.

The north London side lost 2-0 to West Ham in their season opener last weekend.