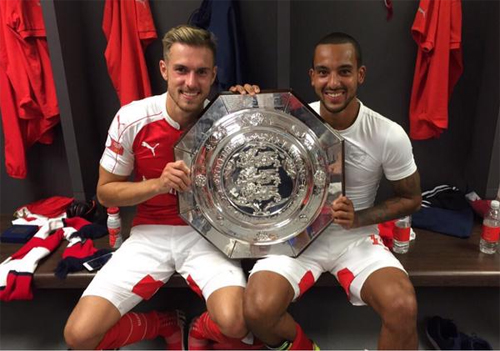 Aaron Ramsey is hungry for more silverware after Arsenal won the Community Shield at Wembley.

The Gunners eased to a 1-0 victory over Premier League champions Chelsea thanks to Arsenal forward Alex Oxlade-Chamberlain’s 25th-minute winner.

The north London side have won three pre-season trophies as well as back-to-back FA Cup and Community Shield titles over the past two years.

But Ramsey’s appetite to win trophies is far from satisfied after the Wales midfielder took to Twitter to post a snap with Theo Walcott and their latest piece of silverware.

Start as you mean to go on… #AFC pic.twitter.com/c59EgaejXr

Arsenal ended their nine-year wait for a trophy in 2014 after Ramsey netted an extra-time winner to seal a 3-1 victory over Hull City in the FA Cup final.

Arsene Wenger’s successfully defended their crown in May after an emphatic 4-0 victory over Tim Sherwood’s resurgent Aston Villa side at Wembley.

The Gunners begin their Premier League season with a home game against West Ham United.

Jose Mourinho: Arsenal won but Chelsea were the better team