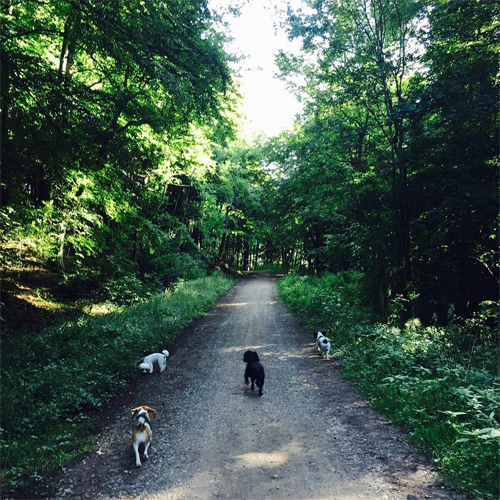 Aaron Ramsey stretched his legs after a demanding game at Selhurst Park at the weekend as the Arsenal midfielder took his pack of dogs for a walk on Tuesday.

The Gunners midfielder was up early to walk out any lactic acid built up in his legs following the north London side’s battling 2-1 victory over Crystal Palace.

Ramsey played a part in the build-up to Arsenal’s second-half winner on Saturday afternoon after he teed up Hector Bellerin to cross for Alexis Sanchez, whose header was deflected into the net by Damien Delaney.

And the Arsenal midfielder uploaded a snap of his four canine friends on his Instagram page on a walk in a picturesque wood on Tuesday morning.

The Gunners won back-to-back FA Cups in May after a 4-0 victory over Aston Villa in the final at Wembley.

Arsene Wenger’s side also landed an early blow on Chelsea after a 1-0 win against Jose Mourinho’s men in the Community Shield.