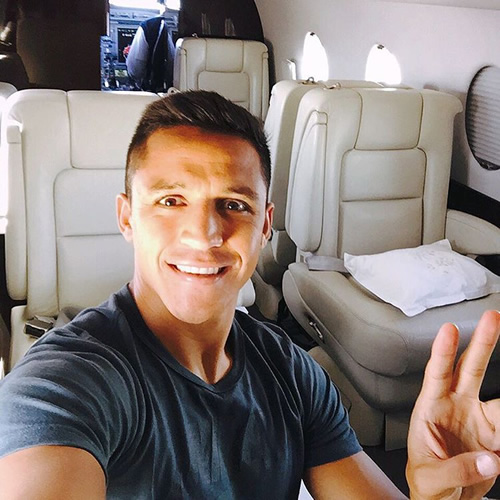 Alexis Sanchez was all smiles as he posed for a selfie in a private jet as he prepared to join up with the Chile national team on Monday.

The 26-year-old played the full 90 minutes as Arsenal secured a 1-0 victory at Newcastle United on Saturday afternoon to return to winning ways in the Premier League.

Sanchez made a quick visit to his hometown of Tocopilla on Sunday, and is now preparing to join up with his international team-mates.

And the forward shared the picture above on his personal Instagram account and wrote: “Now happy to train with my Chilean team 🇨🇱”

The Gunners’ next game is a home clash with Stoke City at Emirates Stadium after the international break on 12 September.

Sanchez, who joined Arseanl from Barcelona last summer, recently stepped in to help his hometown after it was battered by torrential storms which damaged the town’s infrastructure this month.