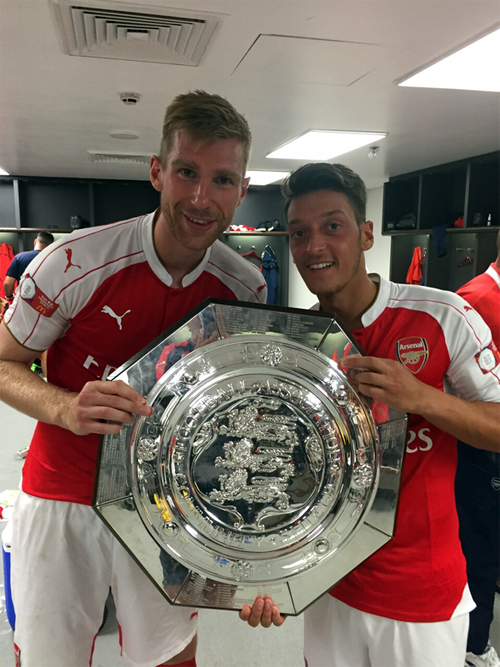 Mesut Ozil is getting used to winning trophies at Arsenal after the Gunners midfielder posed with the Community Shield following a 1-0 win against Chelsea.

The north London side managed to retain their trophy after England international Alex Oxlade-Chamberlain scored a first-half winner at Wembley.

Ozil, who moved to Arsenal in a £42.5m deal from Real Madrid in 2013, was part of the Gunners side that eased to a 3-0 win against Manchester City last term.

And the Germany international got a snap with his compatriot Per Mertesacker following the narrow win, which he hastily posted on Twitter.

Ozil wasn’t the only Arsenal player to rush to social media to celebrate their latest success as Hector Bellerin reflected on their second Community Shield win.

Arsenal have made it back-to-back wins at Wembley after a 4-0 victory over Aston Villa in the FA Cup final earlier this season.

The Gunners start their Premier League campaign with a home tie against West Ham United next weekend.

Jose Mourinho: Arsenal won but Chelsea were the better team