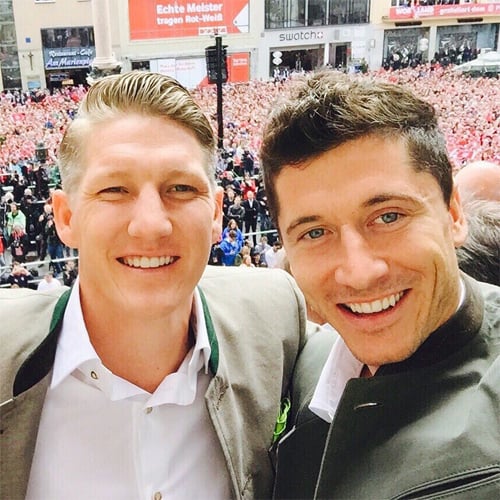 The two played together at Bayern Munich last season following the latter’s switch from Borussia Dortmund to the 25-times German champions.

Lewandowski has been linked with a switch to Arsenal as Arsene Wenger looks to bolster his attacking options, but the Frenchman would have to fork out at least £50m to get his man despite talks of tension between Pep Guardiola and many of his star players.

Schweinsteiger wrote: “Happy Birthday, @_rl9. Hope you have a good one!”

The Polish striker netted 17 Bundesliga goals last term, and has scored one in as many games this season. Doubts remain as to whether he would be interested in a move that would see him pitted against Schweinsteiger once more.

Schweinsteiger, who plied his trade at the Allianz Arena for 17 years before moving to Manchester in July to become the club’s first German player to feature in competitive action.