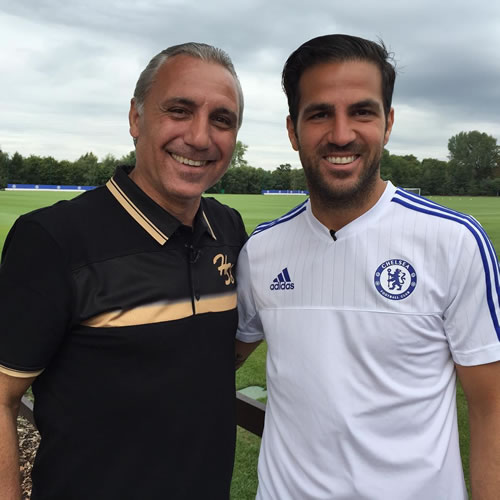 Cesc Fabregas looked in good spirits as he posed for a picture with Hristo Stoichkov at Chelsea’ Cobham training ground on Wednesday afternoon.

Fabregas was back at the west London club’s training base after Jose Mourinho’s men were given two days off following their 2-2 draw with Swansea City in their Premier League opener on Saturday evening.

The Spanish playmaker posted the picture above of himself with Stoichkov on his personal Instagram account and wrote: “Great interview with a real top guy! #hristostoichkov”

The 28-year-old Fabregas played 76 minutes as Mourinho’s defending champions were held to a draw by the Swans at Stamford Bridge on Saturday.

Fabregas, who joined Chelsea from Barcelona last summer in a reported £27m deal, was pictured unwinding in warmer climes on Sunday and Monday after being given some time off by Mourinho.

Defending champions Chelsea return to Premier League action when they take on Manchester City in their next game on Sunday afternoon.